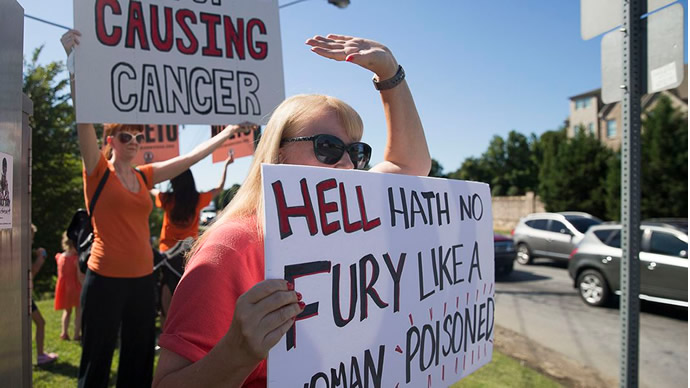 At least six lawsuits have been filed against two companies, alleging their use of a carcinogenic gas to sterilize medical devices caused cancer in residents who live or work near their facilities.

Hundreds more lawsuits are expected to follow, according to attorneys involved.

The litigation targets Covington-based Becton Dickinson and Sterigenics, which operates a plant near Smyrna in Cobb County. Both companies use ethylene oxide in the sterilization process, and have state-issued permits to emit fumes into the atmosphere.

The suits claim emissions of the gas contributed to health issues, including cancer diagnoses, for residents who were exposed to the chemical.

One suit, filed in Gwinnett Superior Court on behalf of Gena McLendon, claims she worked near the BD plant in Covington for many years and in May 2019 was diagnosed with smoldering multiple myeloma, a pre-cancerous condition.

“If we didn’t feel confident we could prove the link between the ethylene oxide released over the years and Ms. McLendon’s cancer, we would not have brought all of these cases,” said attorney Darren Penn, who has filed three suits.

BD said in a statement that it does not comment on pending litigation, but said ethylene oxide monitoring data released in August by the Georgia Environmental Protection Division shows levels near its facilities are equivalent to those found in a state park in south Georgia, and at the EPD’s background monitoring site in southern DeKalb County.

Sterigenics spokesman Bryan Locke said the company empathizes with anyone battling cancer, “but our Atlanta facility’s safe operations are not responsible for causing the illnesses alleged in these lawsuits.”

“We intend to vigorously defend against the plaintiffs' unfounded claims," he said.

The suits say residents who lived or worked within five miles of either plant developed cancer-related diseases because of the emissions. They also say the companies knew or should have known that ethylene oxide is a dangerous carcinogen that has been linked to various illnesses.

Cale Conley, an Atlanta attorney representing two Cobb cancer survivors in their lawsuits against Sterigenics, said the litigation he has filed asks the company to compensate clients for their medical expenses and for the “physical and mental anguish, anxiety and suffering” they’ve experienced as they battled cancer.

“I look forward to the discovery process so we can get to the whole truth of what’s going on at Sterigenics and for how long and how bad it has been,” he said.

Penn alleged in the filings that some people were exposed to emissions from BD warehouses where medical equipment was stored after being treated with ethylene oxide. BD did not have permits for some of the warehousing, he said, and was not testing for emissions.

The use of ethylene oxide to sterilize medical equipment at Sterigenics came under scrutiny after a July 2019 story by WebMD and Georgia Health News reported potential increased cancer risks for residents in neighborhoods surrounding the plant, which is located on Olympic Industrial Drive near Smyrna.

Following the WebMD report, some cancer survivors wondered if their long-term exposure to ethylene oxide factored into their illnesses.

Tony Adams and Bridget Kurt, Cobb residents who are members of the Stop Sterigenics-Georgia grassroots organization, said they are not surprised the lawsuits have been filed against both companies. Kurt told The Atlanta Journal-Constitution that one of her neighbors has lived in the community for 20 years and was also diagnosed with cancer.

“If Sterigenics is creating a higher cancer risk in our neighborhoods, they need to be shut down," she said.

“Their actions just don’t match their statements,” he said.

Amid public outcry and protests, Sterigenics suspended operations last summer to install new pollution controls. Cobb County later kept the plant closed, alleging that it was out of compliance with its fire codes.

To help fight the shortage of medical equipment due to the COVID-19 pandemic, Cobb County Chairman Mike Boyce in March signed an emergency declaration to allow the company to resume sterilization activity on a limited basis.

Last month, Sterigenics filed a lawsuit against the Board of Tax Assessors, claiming it targeted the company with its actions to lower the property values of thousands of homes around its plant without proper data to back up its decision.

The board in April approved a 10% reduction on residential property valuations within a two-mile radius of the facility, said Chief Appraiser Stephen White. The reduction affects more than 5,000 homes.