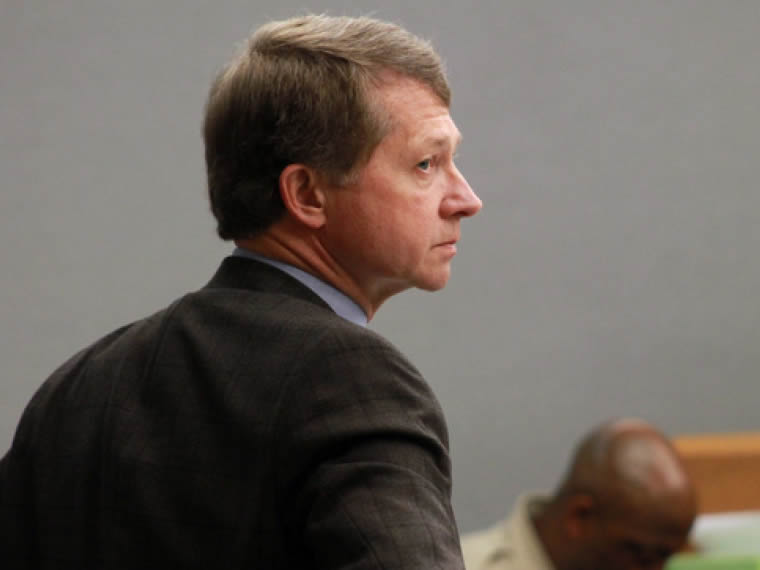 The many trials of Ford's lead counsel Alan Thomas

Ford Motor Co.’s lead counsel in a high-stakes product liability trial going on in Lawrenceville has traveled a long road to get there. D. Alan Thomas of Huie, Fernambucq & Stewart in Birmingham, Alabama, has represented Ford for much of his three-decade career in trials around the country—particularly in the Southeast, where he’s been seen driving to court in a Ford pickup truck.

But Thomas ran into trouble with a Georgia judge back in 2011 and was tossed out of another Ford trial in Marietta—he and his co-counsel, Paul Malek, too. Cobb County State Court Judge Kathryn Tanksley revoked their permission to practice in the state for the trial and sent them out of the courtroom.

The dust-up was over a disclosure about Ford’s insurance coverage that led to a mistrial. During discovery and pretrial motion hearings, the plaintiffs counsel—Jeff Harris, Darren Penn, Steve Lowry, Tony DelCampo and Jed Manton of the firm then called Harris Penn Lowry DelCampo—asked repeatedly for Ford to name any insurance carriers that could be relevant to the case. Georgia law requires all parties with financial or personal interest in a potential judgment to be listed in the pretrial order so that jurors can be screened for any conflicts of interest.

Thomas had responded repeatedly with Ford’s standard answer, implying the company was self-insured: “Ford has sufficient resources to satisfy any judgment that reasonably could be expected.”

But on the morning after the first full day of jury selection, Thomas announced in court that he had just learned by email from the general counsel’s office that Ford had insurance coverage for verdicts in excess of $25 million. At least six policies for excess coverage could be in play. More were identified later.

Thomas said he had not intentionally misled the court, but the judge called that assertion “almost insulting.” She declared a mistrial, scrapped the jury and ordered a new one, dismissed Thomas and Malek and sanctioned Ford by precluding its defense on one issue: failure to warn of a product defect. In a daylong hearing over the sanction for Ford, an in-house lawyer testified by video that she had at first misunderstood the question from the lawyers about the insurance coverage, then corrected the misinformation just before the drama in court.

As he left Tanksley’s courtroom, Thomas was asked if he’d like to comment on what just happened. “I’d love to, but I don’t think it would be appropriate,” he answered and kept walking.

Thomas challenged Tanksley’s order disqualifying him. His lawyers told the Georgia Court of Appeals that the episode jeopardized his career and threatened his livelihood. They said he had done nothing to mislead the court and reported the misunderstanding immediately.

It took two years, but Thomas finally won his point. In 2012, the Court of Appeals vacated Tanksley’s order revoking Thomas’ and Malek’s admission to practice as trial counsel pro hac vice in the case of the family of Deebs Young v. Ford—which was long over because Ford settled it in the middle of the trial after losing Thomas. The Youngs had presented most of their witnesses testifying that their 15-year-old son was killed by the seat belt he was wearing when his soccer coach’s Explorer rolled over. The grieving parents were to be next on the stand when Ford made the deal.

The disqualification wasn’t about that one case, it was about honor, Thomas’ lead defender, Bowers, said at the time.

“We thus conclude that because this order bears directly upon the attorneys’ interests, they are directly aggrieved by the decision,” Judge Christopher McFadden wrote for the Court of Appeals. Joined by Judges Anne Barnes and William “Billy” Ray, McFadden didn’t address whether Tanksley was right or wrong but ruled that she should have allowed the lawyers a hearing to defend themselves before deciding. They remanded the matter to Tanksley, who eventually determined no hearing was necessary since the Young case was over, and the whole dispute dropped. Tanksley has since retired.

Still, the insurance revelation in the Young case led to verdicts being overturned in three other cases that Ford had won—and that stuck. The Georgia Supreme Court unanimously upheld the reversal of one of the cases in 2014. They all settled without going back for new trials.

“If this case is to teach any lesson, it is that the civil discovery process is supposed to work to allow the parties to obtain the information they need to prove and defend their cases at trial before impartial juries,” Justice David Nahmias wrote in a 58-page opinion. “Discovery is not supposed to be a game in which the parties maneuver to hide the truth and relevant facts, and when a party does intentionally mislead its adversary, it bears the risk that the truth will later be revealed and that the judgment it obtained will be re-opened to allow a new trial based on the truth.”

Now, four years later, Thomas is back in Georgia—with his same co-counsel, Malek—trying a case for Ford. This one is before Gwinnett County State Court Judge Shawn Bratton. It’s another wrongful death rollover lawsuit—this one about a roof and the death of Melvin and Voncille Hill, South Georgia farmers who died in 2014 on their way to pick up a tractor part.

Thomas declined to comment for this story. “While I would love to talk with you, I’m sure you understand that it would be inappropriate for any of the lawyers to comment on this ongoing case,” Thomas said by email Sunday night.

Like the Young case, the Hill story is tragic and painful. And Thomas is defending Ford just as tenaciously as before, and fighting as much as ever with opposing counsel—this time led by Jim Butler of Butler Wooten & Peak.

Courtroom View Network is capturing the trial on camera, offering subscribers live stream and video. Thomas can be seen taking the same almost friendly tone to start with cross-examining plaintiffs’ experts: “We’ve seen each other before, haven’t we?”

From there he moves on to a series of questions to paint the expert as a professional plaintiff’s witness against automakers.

The approach brings repeated objections from Butler. And the battle continues.

It’s clear that one thing has changed: Thomas is taking no chances with being accused of failing to disclose Ford’s insurance coverage. The pretrial order in Hill lists 18 different insurance carriers in two different places, even though Ford still objects to having to qualify the jury on that basis, saying it’s unfair
and misleading. Ford would call on them for reimbursement only for judgments in excess of $25 million.
And the Hill pretrial disclosures go far beyond those of the past.

“After Ford satisfies any settlement or judgment, it may seek reimbursement from its insurers if appropriate. Insurance coverage varies by year and the circumstances surrounding a case; therefore, Ford must determine which insurance policies cover an occurrence on a case-by-case basis,” Thomas’ portion of the order says. “The identity of insurers applicable to this case may change with the passage of time and/or the allegations asserted in the case. For example, excess policies may be sold to different insurers or claims may be made against a policy that will exhaust its limits. The above list of excess insurers is correct as of March 9, 2018.”