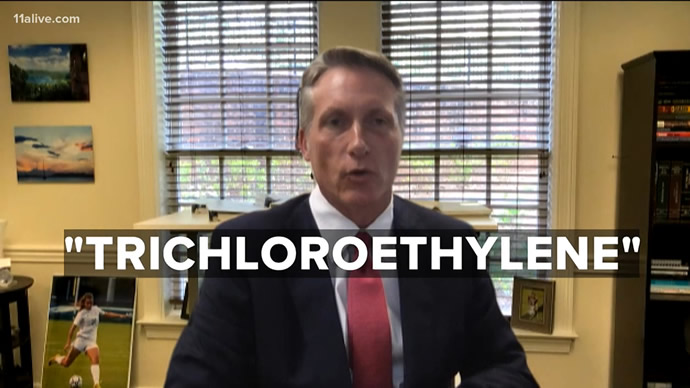 COVINGTON, Ga. — They are explosive allegations against two companies in Covington, coming from cancer patients who live near the companies’ plants.

Residents in Covington are accusing the companies, BD Bard and SRG Global, of knowingly dumping cancer-causing chemicals into the air or into the water.

More than 150 people are suing BD Bard, and some of them are also suing SRG Global, blaming the companies for their cancers.

The two plants are next door to each other.

The residents claim that for years, BD Bard, which sterilizes medical equipment, has released a cancer-causing chemical into the air, ethylene oxide.

And some of the residents are also suing SRG Global, which makes auto parts, accusing SRG of polluting groundwater.

“SRG - that company was responsible for the release of trichloroethylene into the groundwater in that community that’s right across the street,” said the plaintiffs’ attorney, Darren Penn, Thursday.

The attorney said he will prove a link between the chemicals in the air and water from the plants, and the cancers of the nearby residents.

“We think we have the evidence, we will present the evidence in court that will establish a very clear link not only generally that ethylene oxide (and trichloroethylene) can cause the ailments that are involved in these suits, but specifically with these individuals," he said. "We feel pretty strongly that we will be able to make that connection."

BD Bard emailed a statement to 11Alive denying the allegations, saying that the levels of ethylene oxide in the air in that area are no higher than the normal levels of the chemical that are in the atmosphere.

What do the residents want?

“The ultimate goal is to change conduct,” Penn said. “To make sure that something like this never happens again. Ultimately, we want to change the behavior.”

Here is the full statement from BD Bard:

As part of our commitment to employees and the communities we call home, BD has been continuously employing technology to control ethylene oxide (EtO) emissions effectively at its Covington and Madison plants for more than 20 years. BD denies all of the allegations in the civil lawsuits and will vigorously defend these allegations in court.

Georgia residents can review actual air monitoring data for their community collected by the Georgia EPD. The raw data is available on the Georgia EPD Website.

Based on extensive air monitoring data collected over the past two years, average concentrations of EtO in ambient air samples in the Covington, Georgia area are generally lower than the concentrations observed at EPD’s background air monitoring station in South DeKalb, as well as in General Coffee State Park in Southeast Georgia, a five-hour drive from Atlanta. The data also show that average EtO concentrations across the greater Atlanta area are about the same in areas where EtO sterilization facilities operate and areas where they do not.