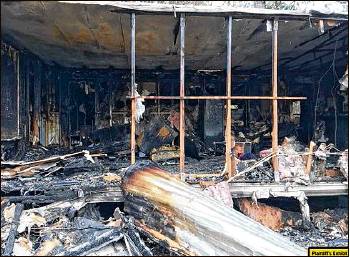 Irvin R. Love was searching Amazon for the perfect Christmas gift for his girlfriend’s daughter when a hoverboard popped up at a bargain price.

But the $264 hoverboard that was supposed to make Christmas 2015 special ended up torching Love’s Georgia home and leaving him so badly injured that doctors resorted to placing cadaver skin over his severe burns, according to a new lawsuit.

The hoverboard wasn’t even plugged in when it ignited, starting a fire so hot that it melted the gun safe inside Love’s home in Pooler, which is near Savannah.

His lawsuit claims Amazon knew that it was facilitating the shipment of poor-quality hoverboards from China that contained lithium-ion batteries that could be dangerous. Before Love’s house burned down, the lawsuit says, Amazon was aware of multiple instances of fires across the country caused by hoverboards sold through its website but did not warn customers who had purchased the boards.

Love suffered burns on his head, face, back and shoulders and has permanent scars, according to the lawsuit.

Filed this month in federal court in the Northern District of Georgia, Love’s case raises all sorts of consumer protection questions related to the one-click approach to shopping that many Americans now rely on.

Darren Penn, one of the attorneys representing Love, said shoppers may not realize what’s happening when online shopping and global production come together.

“It’s basically an epidemic,” Penn said. “These Chinese manufacturers are so good at making knockoffs. Once they see a hot product and they know it’s going to be really good and very positive and consumers are going to want to buy it, they will manufacture a bunch of knock-offs very quickly and just flood the market with them.”

Hoverboards were one of the top items on Christmas lists when Love decided to buy one, and little companies with all sorts of names were popping up to sell them. The lawsuit alleges that Amazon was routinely selling hoverboards whose batteries did not comply with safety standards.

The issue of cheaply-made knock-off products “is a real consumer protection issue that needs to be addressed,” Penn said. “This goes way beyond just hoverboards – it could be any product,” he said.

Amazon declined to comment on the case when contacted by The Atlanta Journal-Constitution.

Penn said it’s difficult to pursue a case against a Chinese company. He said that Amazon makes that even more difficult by refusing to disclose information about the companies selling products on its site.

David Dreyer, another attorney representing Love, said most U.S. consumers rely on the nation’s product safety requirements and the ability to file a lawsuit in U.S. courts to be confident about the safety of the products they buy. But online shopping may expose consumers to risks they may not think about when they are shopping on a widely used site such as Amazon.

“People in China have been making a lot of bad stuff for a long time, the only difference is that Amazon now brings it to our front door,” Dreyer said. “But for that, people would not have rooted around the internet trying to find a manufacturer in China to get a hoverboard.”

Love’s lawsuit names a series of defendants involved in making and importing the hoverboard and its component parts – including the battery.

The suit accuses the companies of failing to warn consumers about the dangers of the product. It also says the companies failed to properly design, manufacture and test the hoverboards.

In recent years, fires have been associated with a variety of products that rely on lithium-ion batteries: hoverboards, laptops and even smart phones.

Love purchased the hoverboard in November 2015. Amazon pulled some hoverboards from its site in late December 2015, after safety concerns started to be raised.

In 2016, more than 500,000 hoverboards were recalled by 11 different companies, according to the U.S. Consumer Product Safety Commission. The commission’s website says it is aware of more than 250 hover-board incidents related to fires or overheating since 2015.

The commission says a consumer seeking to buy a hoverboard should check to make sure it meets safety standards.

But the commission cautions that even compliance with standards doesn’t guarantee that a hoverboard won’t catch fire.

The attorneys involved in Love’s case said consumers need to look beyond the Amazon name before buying a product.

“My take away would be always make sure you read who the actual seller is and who the manufacturer is and verify this is actually what I am intending to buy,” Penn said.