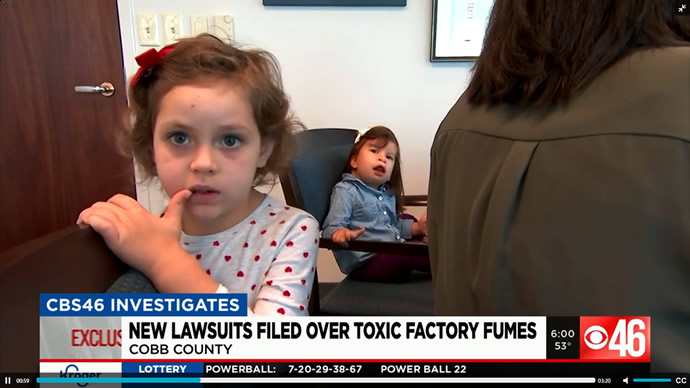 SMYRNA, Ga. (CBS46) — More than 300 people have developed cancer or other illnesses, attorneys say, as a result of exposure to a toxic gas at a medical sterilization plant in Cobb County.

Lawsuits allege that Smyrna plant, Sterigenics, which has been under fire for the last two years, released airborne toxins that caused elevated cancer risks to those living in surrounding neighborhoods.

Now, new court filings reveal another company could potentially be facing blame. Not only is Sterigenics listed on the lawsuit but so is its landlord, Prologis, who attorneys say did not repair or maintain the facility as it was required too under the lease, and may have exposed hundreds more to harmful gas.

Ethylene oxide or EtO is a flammable, colorless gas that the EPA categorized as a cancer-causing agent in 2016.

New filings obtained by CBS46 Investigates argue that landlord Prologis, “failed to maintain the Sterigenic facility’s roof and walls such that EtO has been able to escape into the surrounding community.”

.“While Sterigenics is, in our mind, polluting the community. They’ve been able to do it because Prologis as the landlord hasn’t lived by its environmentally conscious name,” said Cale Conley, an attorney representing some residents.

According to court documents, a Prologis property manager emailed a roofing company in July 2017, “submitted a roof leak request. This building’s roof is killing me.”

That August, she emailed him again, “I’m dying… it’s like we could’ve put a new roof on this one already this year.”

“The company that’s supposed to be keeping the integrity of the roof has had to make repair after repair,” said Conley. “It’s concerning.”

We reached out to both Sterigenics and Prologis.

A spokesperson for Sterigenics said: “Sterigenics sympathizes with anyone battling cancer.  However, our Atlanta facility operates safely as it sterilizes vital medical products, and we are confident that the facility’s operations have not caused any illness alleged in these lawsuits.  As with the prior lawsuits filed in Georgia making similar unfounded claims about our Atlanta facility, we will vigorously defend ourselves against these additional lawsuits the plaintiffs filed this week.”

A spokesperson for Prologis said: "Prologis develops, owns and leases nearly one billion square feet of industrial property around the world. With respect to the premises at issue, Sterigenics has exclusive possession of the premises pursuant to a lease agreement and is solely responsible for its operations. We do not believe the allegations made against Prologis in these lawsuits have any merit and will defend our company accordingly."

Meanwhile, lawsuits were filed on behalf of a portion of 300 clients. Roxanne Gil is one of those clients. Rob Hammers is her attorney.

“I felt like I got struck in that moment,” said Roxanne Gil. “How do two spontaneous events happens to one family?”

Roxanne's 2-year-old daughter, Roslyn, was born with a genetic abnormality.

At the time, the Gil family was living in Smyrna, just a few miles from the Sterigenics plant on Olympic Drive.

“Too odd to be a coincidence, in my opinion,” Gil said.

Plaintiffs like Gil allege that “unsafe ethylene oxide emissions” at Sterigenics caused them or their family members to develop lymphoma, leukemia, breast cancer or brain cancer.

“Our communities are being poisoned and these companies are knowingly putting people at risk,” Gil said.